Expect even more selfie-style videos in your Twitch feed, as the company is improving one of its key apps to make it easier to use its platform on the go. 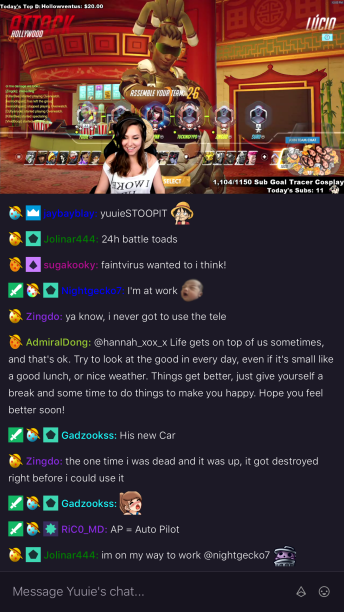 Above: Watching a Twitch stream on iOS.

The iOS and Android Twitch apps are getting an update today that adds a new navigation bar, interface options, and mobile streaming. You still can’t livestream games directly through the application, but you can now use your device’s camera to begin a vlog-style broadcast. This should bring even more content into Twitch, which is the top site for live gaming-related video on the internet. Most recently, the Amazon-owned platform has begun expanding by introducing non-gaming content as part of what it calls Twitch IRL — although gaming-related video is the breadwinner with a total market worth $4.6 billion. And that number could continue to grow as Twitch announced yesterday that it is opening up subscription options to its affiliates who don’t have quite as many regular viewers or followers as a Twitch Partner.

The Twitch mobile app is one of the key ways that viewers engaged with content on the site, and Twitch product director Tom Robertson revealed that the Twitch app has surpassed 83 million installs across all platforms.

“With this redesign we’re ensuring that our amazing creators — who are the reason this community exists — are more discoverable than ever, both to their existing fans and those who have yet to find them,” said Robertson.

The Twitch exec also noted that this update is about improving discoverability for creators. The app now includes Pulse, an algorithm that recommends content you may like in a social-network-style feed. You can also get an instant playlist of videos at any time by pulling down on the top of the screen.

“Not only will our creators reach a new audience through the app itself,” said Robertson. “The launch of mobile streaming gives them the opportunity to offer new content to their fans. We can’t wait to see what they create.”

Twitch’s iOS app is getting a suite of upgrades on top of discoverability and mobile streaming features. A new navigation bar instantly takes you to the Live, Pulse, or Browse sections at the push of a button. Swiping on the screen can now select videos, go back, and more, which is important for one-handed operation. You can also select a “dark mode” theme that turns the bright-white elements of Twitch’s UI darker for viewing that is easier on the eyes in the evening.

Thanks for your interest in the PC Gaming channel

Twitch updates its mobile app with cam streaming and more